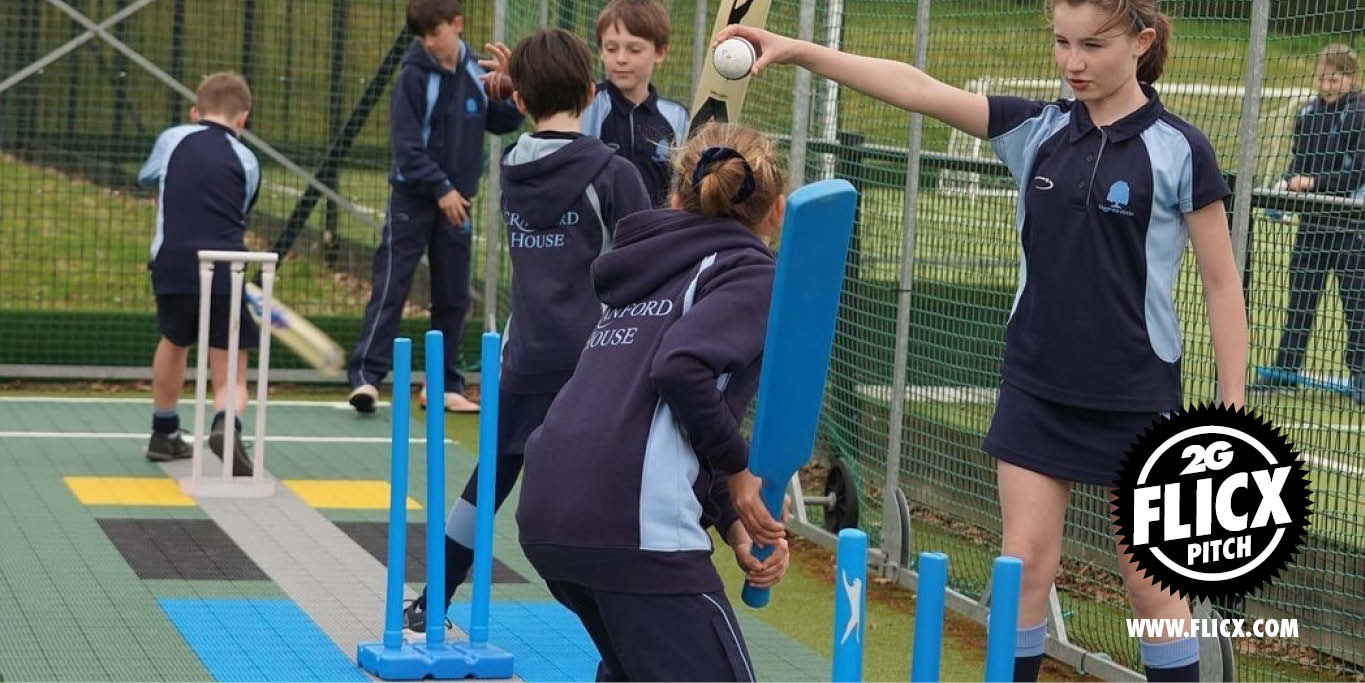 In March of 2022, three 2G Flicx pitches were delivered to the Cranford House School sports department ahead of the 2022 cricket season. After initial use, the 2G Flicx Pitches have received hugely positive feedback in terms of performance and usability. The design of the 3 pitches included a bespoke navy-blue Skills Pitch alongside two Multi-Age/Skills Hybrid Pitches all branded with the Cranford House School Logo.

Jack Perham, the Head of Cricket at Cranford House School kindly gave us an interview about his experiences with the 2G Flicx Cricket pitch and how it has become a valuable resource for their Cricket Department.

Cranford House established in 1931, is an independent school situated in Moulsford village Oxfordshire. Offering education to boys and girls aged 3-18. Cricket is a newly introduced sport to the Oxfordshire School. It is the first year (2021/22) of hardball cricket and only the fourth year of cricket being played within the school. Introducing “A new era and culture of the sport within what was traditionally a girl’s school, now more recently coeducational throughout.”

Jack first came across the 2G Flicx Pitch in a previous role, through Kimbolton School where some fixtures were played on their bespoke purple pitches.  Having had this previous experience at Kimbolton the pitches have met all expectations at Cranford House.

“Having had experience with it before, its met and fulfilled our expectations.”

The 2G Flicx Pitches are currently being used by all age groups (year 3-13) at Cranford, predominantly alongside grass nets as additional net lanes for practice and for junior fixtures. The Flicx Pitch has also been used to play games on the Astroturf field, for range hitting practice, and on the outfield/grass wickets if it has been too damp to play on.

The Flicx Pitches have been of great benefit to Cranford House allowing for the expansion of their existing cricket facilities and aiding in the development of the students’ cricketing skills.

“They’ve allowed us to host six junior games on our fields, whereas before we could only host three. Whilst supporting the coaching and delivery of match play sessions, with the line/length markings supporting the decision making and discussions.”

The Flicx Pitches have also been a big hit amongst the student’s boosting participation in Cricket as well as growing and developing an interest in the newly introduced sport.

“The visual attraction provides a starting point that gets them playing. We’ve purposely left out two half pitches in the nets during break and lunchtimes, participation and borrowing of cricket equipment has tripled since last year over this first half term.

The 2G Flicx Pitch was designed to provide a true and consistent surface for both batters and all types of bowlers. Allowing batters to trust the true bounce and play their shots as well as giving bowlers the opportunity to get bounce and turn off the surface indicative of a grass cricket wicket. At Cranford House School the Flicx Pitch has offered just that.

“The juniors get ‘true’ carry and bounce, whilst the older players often experience a speed off the pitch and additional carry through to the keeper. With regards to spin, it can be variable but offers enough for young spin bowlers due to the longitudinal lines/grids.”

The all-NEW Skills/ Hybrid design introduced this year by Flicx has been a favourite of Jack’s. It is half our Multi Age Pitch design allowing clubs and schools to host matches for various age groups by simply moving the stumps along the pitch to another colour coded crease-line that cater for different age groups. Then the other half is a Skills Batting End where colourful bowling targets will help your players achieve a consistent line and length whilst developing a batters decision making and shot selection skills.

“The skills hybrid batting ends. Whilst offering instant feedback for bowlers regarding line/length, they also support the decision-making qualities of the batters too, taking the coach (and noise) out of the equation and more pupil centred.”

The future looks bright for Cranford’s Cricket Department. With the aim to continue as is, and to use the Flicx Pitches during the winter at indoor training. Furthermore, leaving one of the pitches out for the winter for the “super keen cricketers”. We at Flicx are glad to part of the growth and development of Cricket at Cranford and would like to wish you all the best in your future cricketing endeavours. Thanks again to Jack Perham (Head of Cricket) for his time to give us some feedback on his experiences.