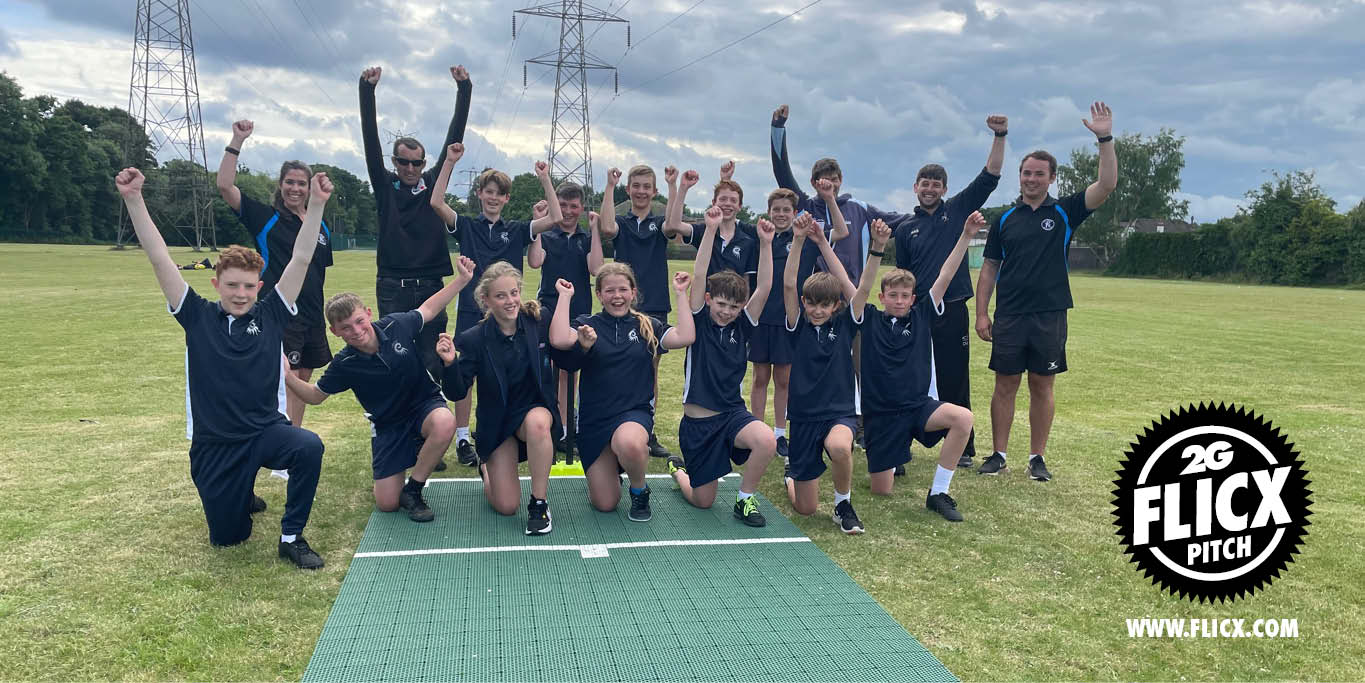 Cricket at a state school in Surrey has just benefited from the developing partnership between the Surrey Cricket Foundation and Flicx UK, manufactures of a quality, portable, roll out cricket wicket. Fullbrook School is the first lucky receipt of a pitch donation, and this project was chosen due to the impact that the pitch would have on the schools expanding cricket programme.

Mark Babb, Cricket Participation Officer at Surrey Cricket Foundation and Kate Costin, Marketing and General Manager at Flicx UK were on hand to watch the first hard ball match on the new portable pitch, which will be enjoyed by girls and boys across different year groups from ages 11 to 18. Costin said

“The donation is the first pitch committed by Flicx and is the result of 10 clubs and schools in the county having invested in 2G Flicx Pitches in the past season with already the threshold for a second pitch donation passed (Valley End CC are confirmed as the worthy recipient). With the 2G Flicx Pitch, versatility and performance are they key drivers for its popularity in Surrey as well as the need to better utilise green spaces for sport and host increasing numbers of players”

“Flicx Pitches visibly improve the experience of batters and enable more children to take part in cricket especially in hard ball games. Another benefit is that it is very low maintenance and here at Fullbrook School, they have now been able to host their first game on site since the demise of the turf square post COVID”

The PE staff were hugely impressed by the pitches performance in its inaugural outing at Fullbrook and plan to use the donated Flicx Pitch to host school fixtures and home cup games as well as inter school matches plus the annual staff game in memory of a cricket mad colleague.

During the visit, the schools cricket club were playing pairs cricket and the boys and girls highlighted the safety element of the new 2G Flicx Pitch with the ball bounce being much more consistent than previous practice directly on the uneven grass. Shots were played to all parts of the field as well as several wickets taken. With around 50-60 players from the school playing in local clubs, Fullbrook is a real hot bed for cricket talent in the Byfleet / Pyrford area.

Geoff Harries, a parent helper, has been integral in helping to establish cricket within the school and now thanks to kit donated by Bat for a Chance and their new Flicx Pitch it has an opportunity to go onto the next level as the school competes in Surrey competitions against other state and private schools. With the talent on show, the future certainly looks bright and the 2G Flicx Pitch will help many generations of cricketers to play a better standard of cricket at Fullbrook School.