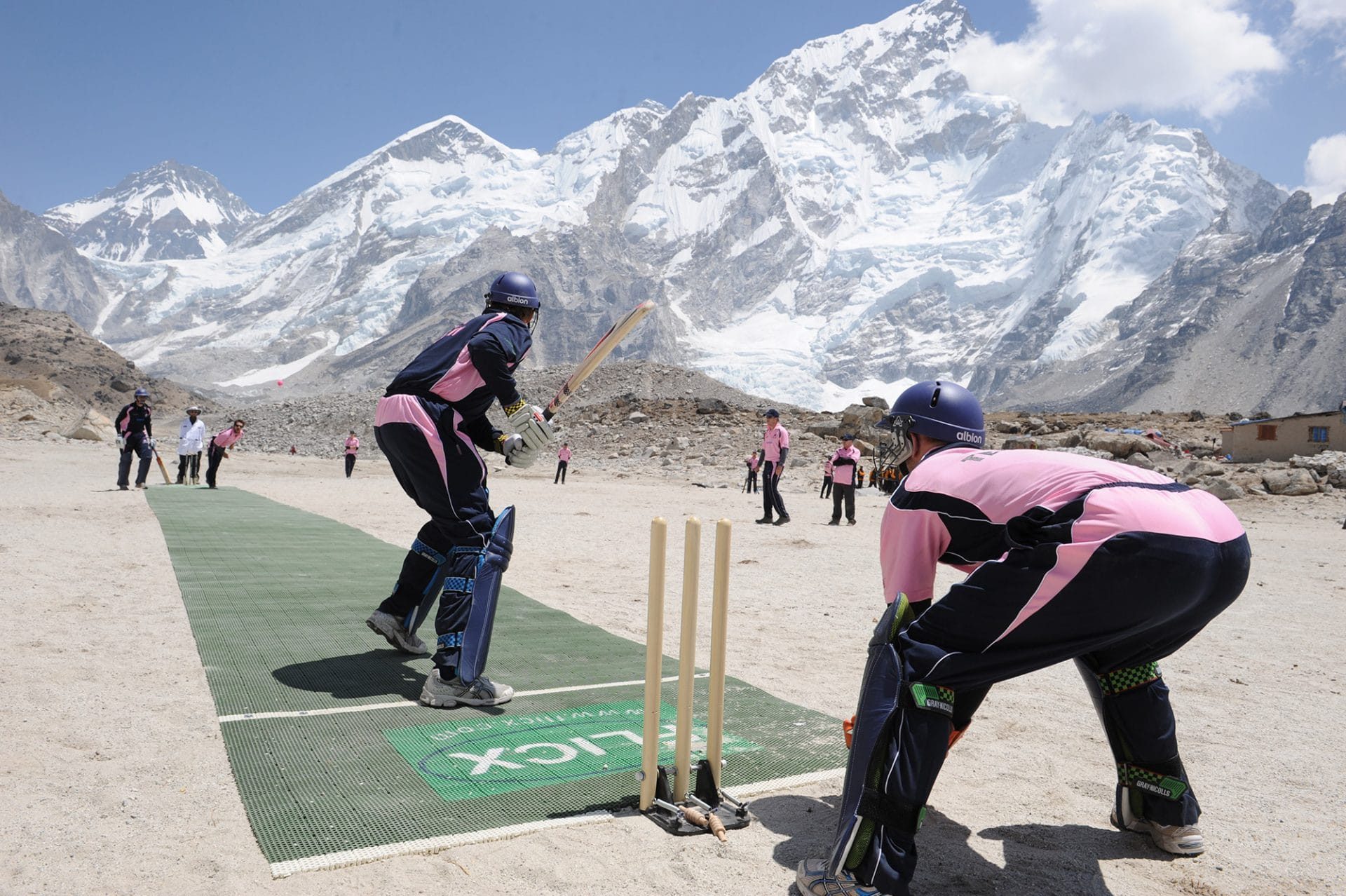 Yesterday the Kia Oval saw the launch of a world record attempt on the highest ever game of cricket, up Mt Kilimanjaro in Africa, with teams to be captained by two Ashes winners: Ashley “King of Spain” Giles MBE – member of the legendary 2005 Ashes-winning England squad and Heather Knight, current England cricketer and Ashes winner.

At 5,785m this will be over 600m higher than the current world record set in 2009. Two teams will be raising money for Cancer Research UK, Tusk and the Rwanda Cricket Stadium Foundation, with a target of £500,000.

Heather and Ashley will be joined by other cricketing greats, including Clare Connor OBE – former England cricket captain, 2005 Ashes winner and now head of England women’s cricket and former South African cricketer Makhaya Ntini. Enthusiastic amateurs will make up the rest of the two teams, headed up by David Harper, who came up with the idea for the whole event in classic British fashion – down the pub.

David said: “As I passed 40 it dawned on me the only way I was ever going to play cricket at the highest level was if I took a game to the top of a mountain.

“Playing at the top of Mt Kilimanjaro will bring a world record to Africa, raise significant sponsorship for three very worthwhile charities, and help raise awareness of the harm that poaching is doing to wildlife across the continent…as well as allowing me to indulge my fantasy of playing against some high quality international cricketers.”

Clare said: “We all need a focus in our lives, even more so when we are trying to cope with personal tragedy. Cancer devastated my family earlier this year so this is my focus for 2014. Cricket has already given me some of my most memorable moments, the highlight being regaining the Ashes in 2005, and I know that this will be up there with the very best of them. I love Africa, I love cricket, I love a challenge and I am so pleased to be able to combine everything that this trip has to offer in order to raise valuable funds for Cancer Research UK.”

Heather said: “I’m extremely excited to be involved in Mt Kili Madness. It’s set to be a very challenging, but amazing opportunity to raise some money for three great charities.

“After my visit to Rwanda earlier in the year, RCSF is a charity that has become close to my heart and to have the opportunity to climb the largest stand alone mountain in the world for RCSF along with two very deserving charities is a challenge I can’t wait to get stuck into.”

Ntini said: “I am absolutely thrilled to be taking part in Mt Kili Madness because although it will be a difficult personal challenge, the impact of cancer across society is so severe that we must do everything we can to try and stop it. This is a disease that is world-wide, ravaging not just South Africa but everywhere, and it is important that we all do everything we can to defeat it. For my part I am climbing up the highest mountain in Africa to play cricket, but for others it will just be about making a donation, raising awareness or just supporting a friend who is affected.”

To qualify for World Record status, the two teams must play a game of T20. Both teams will have to do so after a challenging seven-day climb, risking altitude sickness – a feat which 30% of climbers fail.

All donations will go directly to the charities and all costs associated with this event will be met by the players themselves or by corporate sponsors. The team are still searching for sponsors in addition to those who have been generous enough to sign up. This will be the charity event of the cricketing year and will raise the attention of media and the public alike.

Lisa Aubrey, senior management team, Cancer Research UK, said: “I am delighted that Mt Kili Madness have chosen to support the life-saving work of Cancer Research UK.  Participants will be putting themselves through a tough challenge and all their bravery, grit and determination will be help us to bring forward the day when all cancers are cured. Cancer Research UK’s ambition is to accelerate progress and see three quarters of people surviving the disease within the next 20 years and the support of Mt Kili Madness is helping us to make this a reality.”

Charlie Mayhew MBE, CEO, Tusk, said: “Mt Kili Madness will be a record breaking fundraising event and Tusk is enormously proud to be a beneficiary. We have great admiration for the 22 players that will be trekking to the crater on Mount Kilimanjaro to play cricket at an awe-inspiring altitude of 5,785m. The charity is incredibly thankful for the team’s determination and dedication to raise awareness and much needed funds for the poaching crisis currently engulfing Africa.”

Richard Beghin, managing director, Flicx UK, which is providing the portable cricket pitch for the event, said: “I started Flicx at the back end of Apartheid – so as to assist in creating a level playing field for young white and black cricketers – where they could play a game of cricket without prejudice, racial barriers – but more importantly on skill and the passion to win. “That was in 1998. Today we are very pleased to be involved with developing youngsters in Africa, but also more importantly raising money for three great causes.”

Alan Curr, holder of the current world record game  – at Everest base camp – author of Cricket on Everest, and head of junior cricket in Japan, said: “Well there goes my best conversation starter…I guess I will have to look for a new mountain to play on! But seriously if I am going to lose the world record then at least the fantastic causes that Mt Kili Madness are supporting will benefit.” 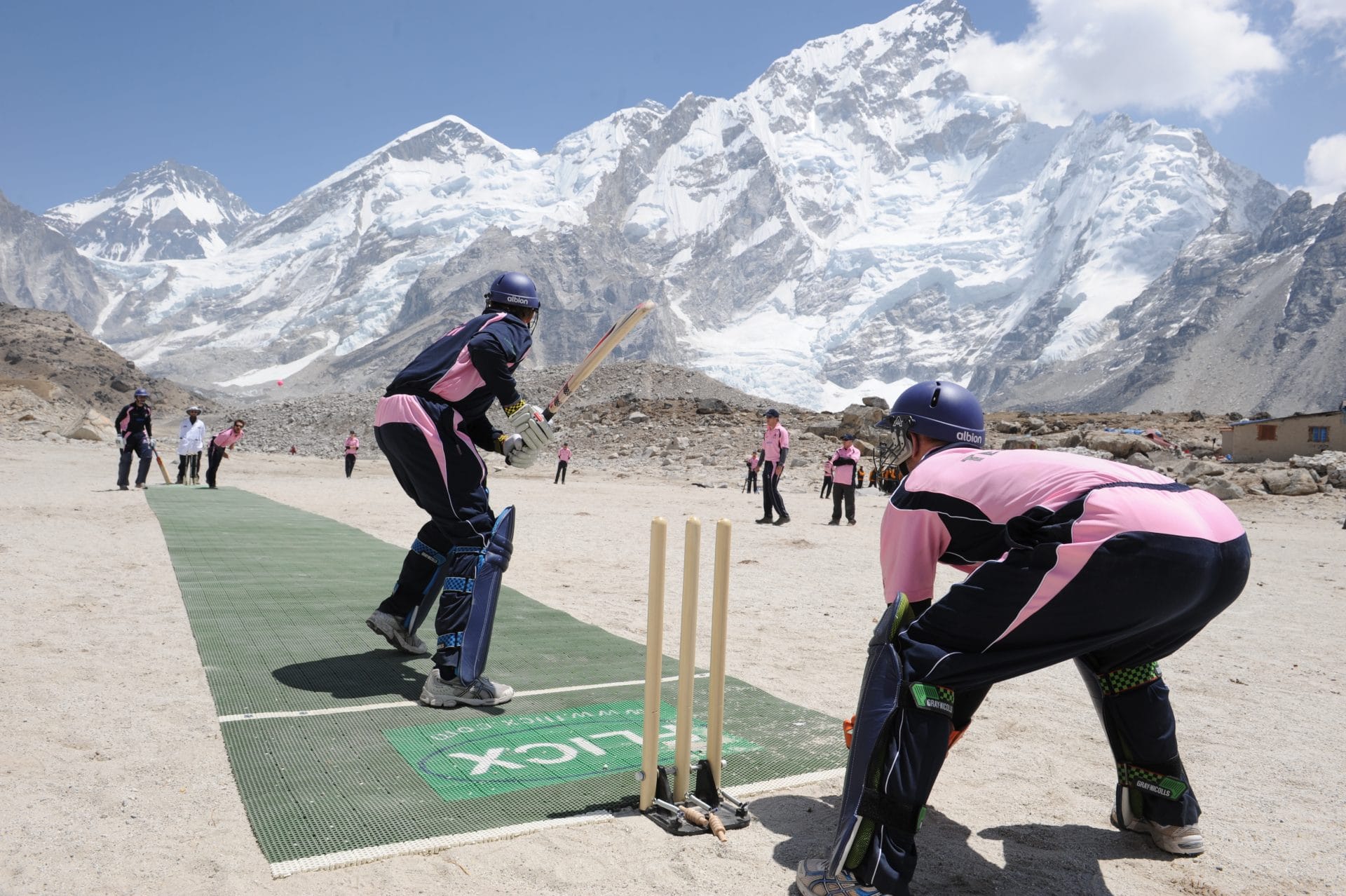 More people have been into space, or sailed single-handedly around the world without stopping than have managed to play a competitive game of cricket above 5,100m.

For interview and sponsorship opportunities, please contact David or Matt, details below.

Donations to: PLEASE INCLUDE IN COVERAGE – http://uk.virginmoneygiving.com/team/MtKiliMadness.

“Our vision is to bring forward the day when all cancers are cured. In the 1970s, less than a quarter of people with cancer survived. But over the last 40 years, survival has doubled – today half will survive. Our ambition is to accelerate progress and see three-quarters of people surviving the disease within the next 20 years.”

“Tusk has, with its partners in the field, been at the forefront of promoting and funding community driven conservation programmes. The charity’s holistic approach recognises that the long-term future for wildlife is dependent on education and sustainable development.”

“The Rwanda Cricket Stadium Foundation was formed in August 2011 to build and manage, on a not-for-profit basis, the first dedicated international cricket ground in Rwanda. The charity is run by a team of cricket enthusiasts from the UK and Rwanda, in partnership with the Marylebone Cricket Club.”

David Harper is one of the leading hotel real estate consultants in the world, having been involved in projects in over 136 countries. He is also an avid cricket fan, watching England all over the world, and playing on six continents. David has personal experience of cancer, having lost both his father and his mentor to the disease.

He has organised many events for Cancer Research including jumping out of an aeroplane, cycling to Amsterdam from London, bungy jumping off Victoria Falls, taking part in the Clipper Round the World Yacht Race and abseiling off Twickenham stadium.

Emma Bamford, author of Casting Off, sailor and adventurer, who sailed with David in the Clipper Round the World Yacht Race, said: “All I did was fly halfway round the world to live on a boat with a stranger – a piffling ordeal compared to playing cricket at the top of a mountain. And what I want to know is – whose job is it to carry the cucumbers 5,785m up Kilimanjaro to make the tea? Seriously, it’s an astonishing project to raise money for very worthy causes. Good luck to all players.”

Oli Broom, Rwanda Cricket Stadium Foundation Trustee and author of Cycling to the Ashes: A Cricketing Adventure from London to Brisbane, added: “I was inspired to go on my own cricket adventure to watch an English Ashes win down under, so I can easily imagine that the prospect of playing the world’s highest, and some would say most eccentric, game of cricket ever will be more than enough to motivate you on your epic climb. What an adventure you’re going to have and I wish you all the very best of luck.”