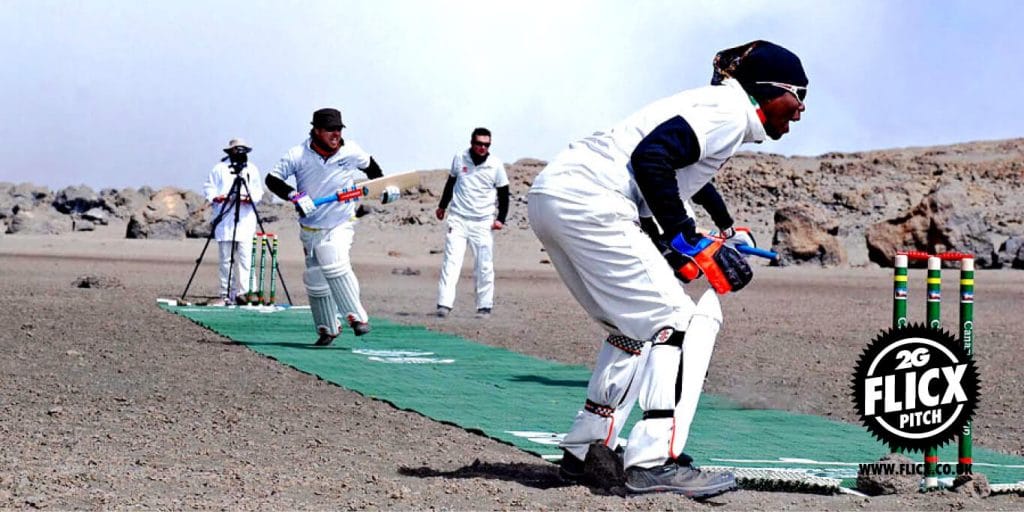 Today, Wednesday 16th July, will see the official launch of Mt Kili Madness – a fundraising attempt to play the highest game of cricket ever at an impressive 5,785 metres. Flicx UK are playing a big part in this match as official supplier of the pitch, a new 2G surface which enables you to play cricket on any flat surface, just by rolling it out. The pitch will be carried in pieces up Africa’s highest peak in Tanzania before being joined up and rolled out for the record breaking game.

22 players, with the all star line up to be announced at the Oval in the official launch, will risk altitude sickness and many other challenges all to raise money to stop poaching and beat cancer. The expedition will set off on Saturday 20th September for a 7 day hike to the summit where the 2G Flicx Pitch will be laid, stumps set up and the cucumber sandwiches cut in preparation for a 20-20 game where the winners will be crowned kings of the mountains whilst the losers face a long trip back down (carrying all the kit!).

NB- To qualify for World Record status, the two teams must play a game of T20 overseen by qualified ECB umpires. Both teams will have to do so after a challenging seven-day climb, risking altitude sickness – a feat which 30% of climbers fail.

Not sure the heels & dress will be part of our @kilimadness trekking outfit. Thanks @FlicxPitch for supporting us! pic.twitter.com/SX1YhU7czd

Mt Kili Madness is aiming to break the world record for the highest cricket game which stands at 5,100m and took place at Everest base camp. Flicx UK supplied the pitch to that trip too on the proviso that the pitch will be donated to a local school. The legacy plan has been put in place for the new 2G Flicx Pitch donated to Kili Madness with owner Richard Beghin delighted to support this unusual fundraising bid for Cancer Research UK, the Rwanda Cricket stadium foundation and Tusk “Mt Kili Madness is an exciting project which we were delighted to lend our backing to in the form of a donation of one of our new 2G pitches. The new surface will enable the record breaking game to be a great one and all raising vital funds for two great charities. The legacy is important to us as a company too and we will be pleased leave the pitch with a local school to enable them to enjoy cricket well after the Mt Kili Madness teams have gone.

Organiser David Harper added: “Playing at the top of Mt Kilimanjaro will bring a world record to Africa, raise significant sponsorship for three very worthwhile charities, and help raise awareness of the harm that poaching is doing to wildlife across the continent…as well as allowing me to indulge my fantasy of playing against some high quality international cricketers.”

This promises to be a truly an epic challenge, an unforgettable experience, and one which will put cricket at the top of the world. Here at Flicx UK we will be following the story every step of the way as we believe cricket has a wonderful ability to bring people together. For more information or to donate towards their £500,000 target click here