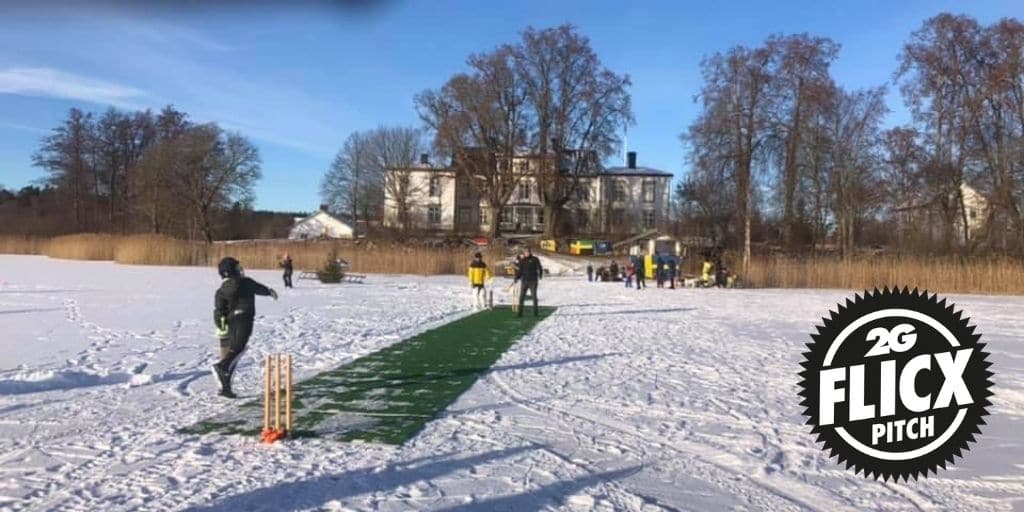 When you mention Sweden, your first thoughts are probably not cricket. However, this does not mean it isn’t played! Guttsta Wicked Cricket Club has a rich history, being one of the first cricket clubs in Sweden and being the main driving force behind forming the Swedish Cricket Federation (SCF).

When it comes to domestic competition, as only a local village club, they competed in the first league to be announced and won the league in its third year!

However, Guttsta Wicked CC are more than just your average cricket club! In the Winter months, putting on activities that suit the climate! Like frozen lake diving, winter swimming and BBQs! With Guttsta Wicked CC, it’s a fun family club with plenty going on regardless as to whether it is cricket season or not!

Ice Cricket? Is that not dangerous?

Guttsta Wicked CC have been playing Ice Cricket every January (except for 2020 due to the pandemic) at a member’s house between Kanada and Finnåkers Bruk since 2013. The house sits right on the edge of Lake Västlandasjön and makes for the perfect centre for winter activities!

“We look forward to the event every year! Club Members love the weekend of fun packed with food, lake diving and cricket!”

The Ice Cricket fixture is held late on in January when the ice on the lake is at its thickest (Safety first!). The club hosts a full event to celebrate not just their ice cricket game, but also Burns Night (25th January) and Australia Day (26th January), making it a multifunctional event with lots going on! The annual event is now dedicated to Kel Markham from Renmark, South Australia who passed away last year – A close friend of Guttsta Wicked CC.

Guttsta Wicked CC playing the fixture on an Original Flicx Pitch that they won back in 2001 for encouraging the indigenous population into the sport. It is safe to say that not many have used a Flicx Pitch on ice regularly! With bowlers feeding stationary; batsman playing like normal; but fielders having to use ice skates to retrieve the batsman’s efforts (If the ice isn’t covered in snow!)

We had the pleasure of speaking to Staffan Lageson from Guttsta Wicked CC over Zoom on the topic of Guttsta’s winter cricket activities and how Ice Cricket started!

“I first met Rich at the Cricket World Cup in 1999. I met him at a conference at Edgbaston and got chatting with him about Cricket in Sweden. Telling him that we play cricket on ice! This was actually a lie!”

“We first arranged an ice cricket game in 2002 on the frozen harbour in Stockholm, due to the harsh winter we were facing. It was all very exciting as we hadn’t heard of any other ice cricket being played… There was talk of a potential game in Talinn, Estonia around the early 2000s, but no pictures to prove it”

“It was only by chance that I threw my ice skates in the car when packing to leave for Stockholm, It was a good thing as otherwise we wouldn’t have been able to fetch the ball very easily!”

“I felt compelled to reach out to Richard and prove to him that we do actually play cricket on ice in Sweden! Sending him the pictures!”

“The pitch’s performance is just what we need and perfect for cricket on top of a frozen lake! Even though it is a little old now, it still performs really well!”