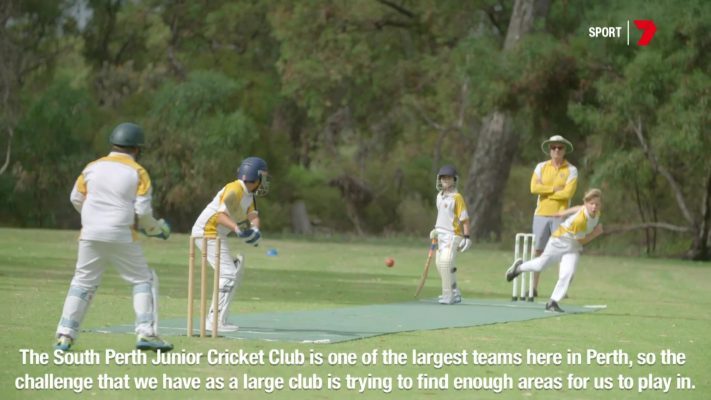 Thanks to their new 2G Flicx Pitch, South Perth Junior Cricket Club (SPJCC) can create a cricket wicket at any park within 15 minutes.

The South Perth Junior Cricket Club is one of the largest in Perth with over 68 junior teams; So one of their toughest challenges as a club is trying to find enough suitable areas for matches and training. This is where a grant from Cricket Australia Grass Roots Fund, as well as the money raised from participation in the Toyota Good for Cricket raffle, has enabled the club to invest in a 2G Flicx Pitch. Flicx Pitch at South Perth Junior Cricket Club has enable them to create new and additional facilities.

“The clubs that have been successful for the Good For Cricket raffle are able to purchase anything they need. So Flicx pitches are certainly on the priority list over here, as grounds shortages are increasingly occurring due to an increase in junior cricket participation” – Alan Singer from Western Australia Cricket Association (WACA)

SPJCC now has two 2G Flicx Pitches which are helping to increase the standard of junior cricket games in Perth. 630 kids play at over 20 different grounds in the city with the Flicx Pitch rolled out. The Flicx pitch provides a stable, realistic cricket pitch surface for Juniors to play on.

“Every single park can, within fifteen to twenty minutes, be turned into a cricket pitch!” said a SPJCC representative.

The SPJCC 2G Flicx Pitches resides at Harold Rossiter Park and after trialling the innovative surface last year, the club decided to invest funds collected from the Toyota raffle to purchase a second pitch which arrived recently. Manufactured in the UK, the pitch comes supplied with a trolley in 2 half pitch rolls, which gives users great versatility and it is quick and easy for club volunteers to move plus roll out and roll back up the pitch after use.

The Flicx Pitches real star quality is its versatility! The same wicket can also be used in the nets, outfield, indoors or over synthetic fields. As well as the most common application of converting existing grass fields into cricketing venues. There has been lots of positive feedback on the pitches performance and consistent bounce the pitches provide. Which is why interest amongst associations, clubs and schools all over the world is so high. The 2G Flicx Pitch is a real facility problem solver and allows participation to develop and the game to grow.