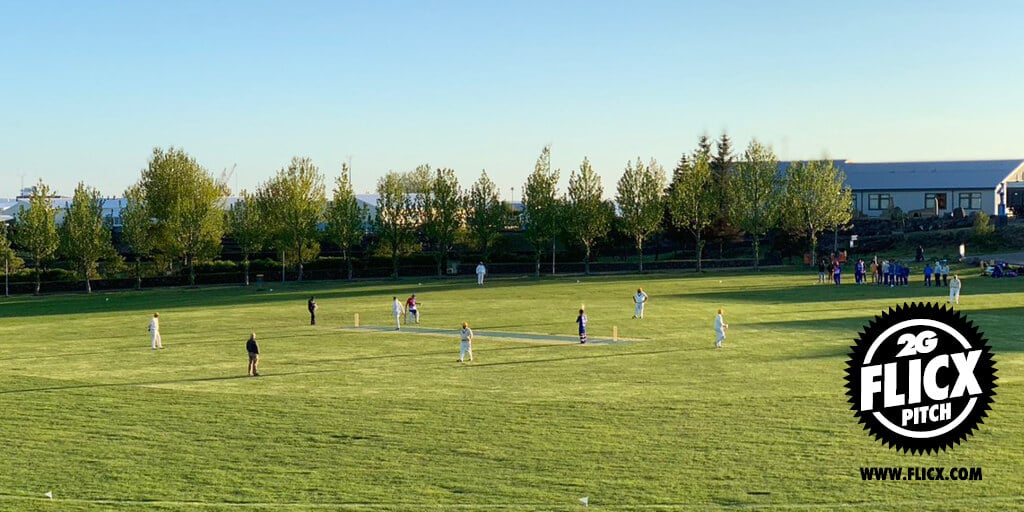 This is the story of how an incredible new cricket facility in Iceland was created and how the 2G Flicx Pitch that they won, is performing at the worlds most northerly cricket ground. If you are a cricket fan who is active on social media, you can’t fail to have been swept along by the wave of passion and enthusiasm that Iceland Cricket have for facilitating the sport that their ninth century Viking ancestors invented, in one of the world’s most restricting climates for hosting the game. Their social posts are all stacked full of wit and good-natured humour and clearly demonstrate their vision to compete and develop a sustainable infrastructure in Iceland, a story which saw Iceland win our “Flicx Pitch Pitch” competition last year. We caught up with Kit Harris, Secretary of Iceland Cricket, following the opening of their brand-new cricket ground at Víðistaðatún in Hafnarfjörður, just to the south west of Reykjavik, to find about how the new facility had come about and of course how the 2G Flicx Pitch that they won is performing.

“The world’s most northerly cricket ground”

By means of context, between 1999 and 2018, cricket in Iceland was exclusively played on artificial football pitches where the bounce was very high and potentially lethal at times. Once their Flicx Pitch win was confirmed, officials carried out a thorough search of all potential green areas around the capital city and identified 36 areas to visit and scope out. 20 of these were existing football fields with high usage whilst 15 of them were deemed unsuitable due to slopes, poor vegetation or lava rock outcrops in the field, which it is forbidden to remove since the locals believe they are inhabited by invisible elves. That left just one option which was just perfect. Víðistaðatún was in a bowl-shaped hollow so the area is naturally sheltered from the elements, meaning the soil is firmer than other fields without the same levels of thatch or moss. It is also a public area. A new hostel and campsite had been built and the campsite pavilion closely resembled a cricket pavilion, so things began to fall into place at this new site.

With very high import duties of 24% into Iceland, bringing in heavy duty lawnmowers and rollers is an expensive task so the Flicx UK team were initially a little apprehensive as to the bounce that could be achieved at Víðistaðatún given the wet climate, thatch present and the fact that the grass could only be cut down to 15mm and a light water filled roller used (our standard recommendation is for the grass to be cut to 10-15mm then a heavy motorised roller being used). However, once the 2G Flicx Pitch was rolled out by the enthusiastic grounds team, the bounce achieved was “very good and substantially better than the previous setup with the most important benefit being that it removed the element of danger for the batsman”. 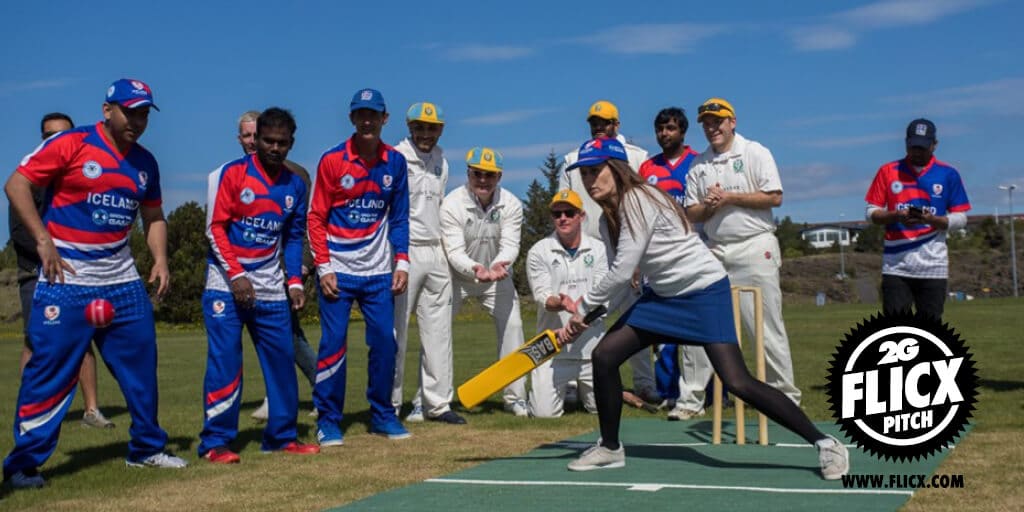 After welcoming the Iceland Prime Minister Katrín Jakobsdóttir to open the ground, the first T20 games played on the new 2G Flicx Pitch produced a bounce that was really true as well as generating good pace and carry which far exceeded expectations – as well as taking spin which sets Flicx apart from other synthetic options where the wickets are usually very quick and bouncy and a “runfest”!! Players also found the mat less slippery that they anticipated, with much better grip so the opening games were high quality affairs as you can see from the footage below.

A couple of points to be aware of, for others thinking of investing in a 2G Flicx Pitch, as picked up by Iceland Cricket. Firstly, wear on the ball is harsher and more significant than playing on natural turf wickets. Iceland used a pink Kookaburra for each T20 innings, and a new ball was put beyond use after 20 overs. Secondly, don’t be alarmed if a square tile is extracted during play. One or two times in the Iceland T20 games, on intensive strikes to the pitch, e.g. a batter digging out a yorker or diving to make a run, a tile was lifted. In this situation, you just need to gently press and clip the wayward tile back into place, which is a very quick task, before carrying on with play.

It’s fair to say that Kit and the rest of the Iceland Cricket team had some initial reservations about the 2G Flicx Pitch and if it would perform and suit their requirements and enhance cricket provision in Iceland. They had considered buying the pitch but they were by no means confident that it would work, given their rough playing area and climate. Winning a free pitch saved them from making what they felt was a 50/50 decision.

“If we would have known at the outset what we know now, we would have certainly bought in the product. Winning one has been fantastic for the sport in the country and I am sure will vastly improve the standards of our matches.”

For more information on Iceland Cricket and the new cricket facility in Iceland, please visit https://www.krikket.is/ or to view the full range of 2G Flicx Pitch products go to https://flicx.com/shop/